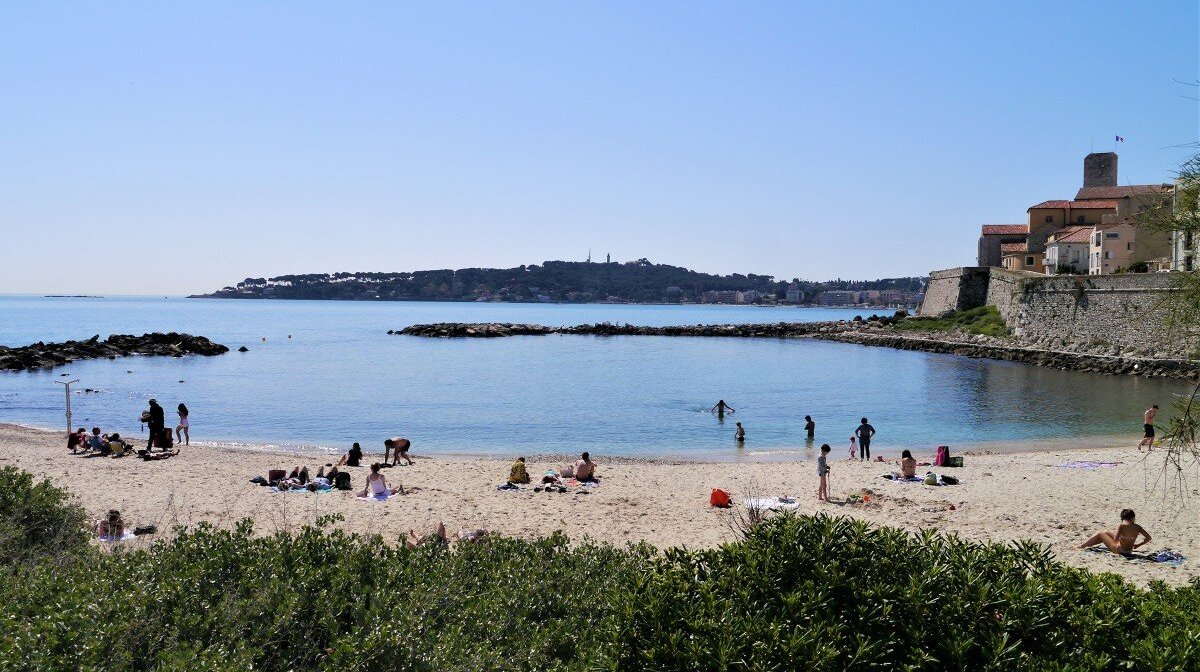 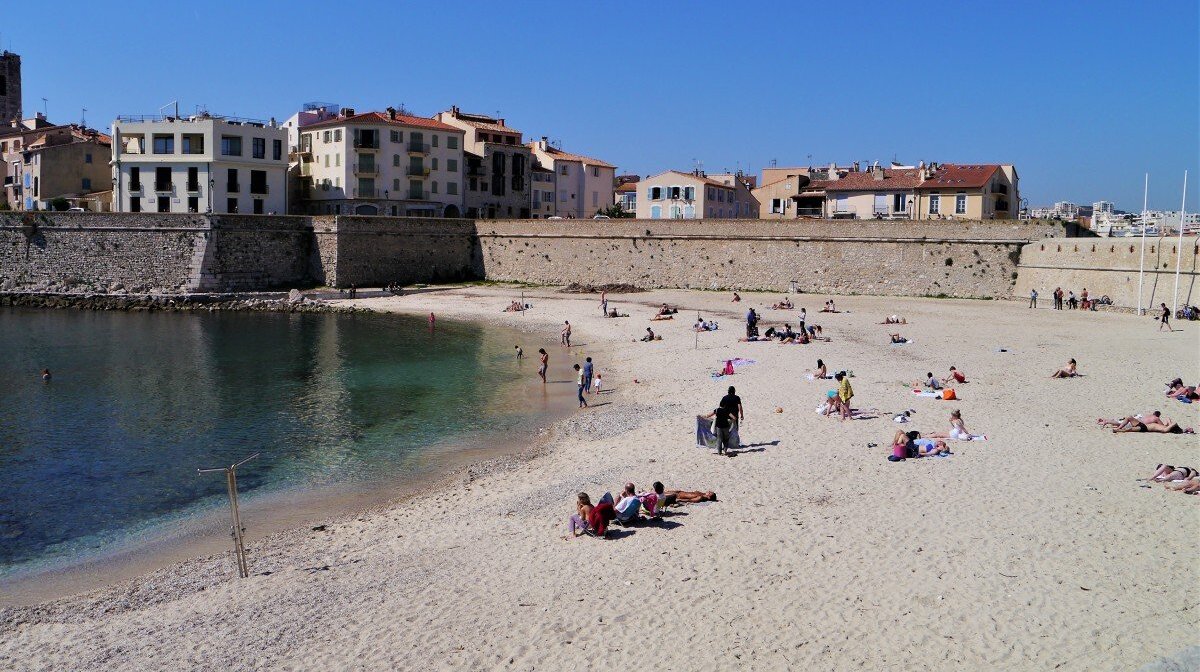 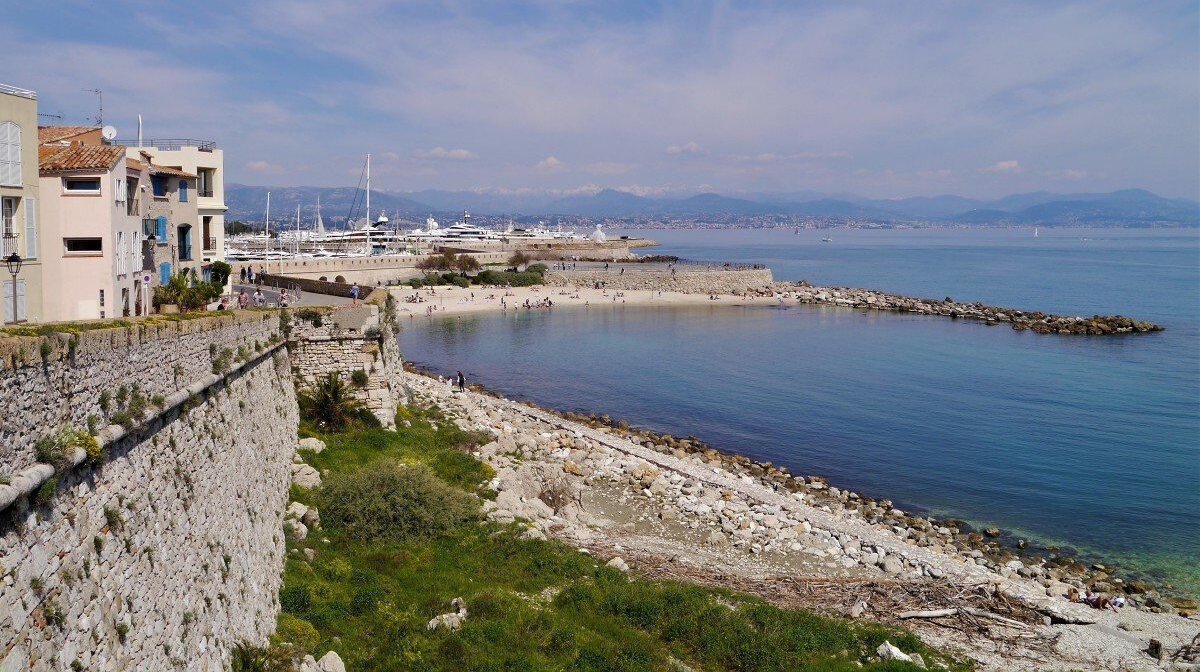 Plage de la Gravette has a lot going for it. It’s wide, sandy and it’s right in the middle of the old town, making it perfect for a quick swim while exploring Antibes, or to spread out with a picnic for the day.

It’s even plenty big enough for a spread-out game of cricket on a quiet day (You’ll struggle hitting a 6 over those huge rampart walls!). A fabulous advantage of Plage de la Gravette is that it’s a purely public beach, meaning that unlike so many other Riviera beaches, the best stretches of sand aren’t claimed by private beach clubs. In high summer, you’ll have to get up early to claim a patch of sand down by the water though.

Because it’s a public beach, there isn’t much at Gravette in the way of the facilities that you’ll find elsewhere at the glamorous private beach clubs. There are fresh water showers by the water’s edge and outside the beach you’ll find public toilets built into the ramparts wall.

Be aware that the council locks the gates to the beach at night, around 8pm and opens them again in the morning. While they do get opened most days in winter,  we’ve found that on the stormy cold days they sometimes don’t get opened.

Out of season: In winter or the shoulder seasons, you’ll be in heaven on a sunny day. Depending on the wind direction, the high ramparts block the wind, and the beach becomes a beautiful sun-trap that is very quiet for much of the day. Lunchtime on sunny winter days bring the sun-worshipping locals out to sit on the ledge underneath the wall in the sun, eating baguettes and reading newspapers, feet in the sand. Some brave souls even swim here year-round!

Dogs: There is a sign on the gates saying dogs are prohibited, but like many things in France, the laws are sometimes interpreted loosely and in this case with a good dose of common sense. Because the beaches are so crowded, you really can’t take your dogs on the beach in high summer - it is illegal. As of October 1st through to mid-April, dogs are permitted on French beaches and it’s often a very social affair, and in the height of winter the council don’t clear the beaches of sticks, meaning huge piles of them collect when the winter storms roll through. This is stick heaven for happy dogs!

Conclusion: Plage de la Gravette is a great beach- great sand, great setting, great for kids. The only real drawback is the water quality in summer, but with such a central location this is a hard beach to beat.

There’s a snack van selling sandwiches, fries and ice-creams parked up at the back of the beach in the summer months but because this beach is right in town it’s perfect for either heading to one of the nearby restaurants or picking up a picnic for the beach. Gravette is less than a 5-minute walk from the fantastic Provencal market, which sells perfect picnic basket fodder: giant wheels of cheeses, olives, cured meats and fresh bread. Don’t miss the Nicoise speciality socca from this market, a wood-fired chickpea crepe served all oily and peppery in a piece of tin foil, delicious!

It’s a very pretty beach, with the backdrop of the tower of the Picasso museum and jumble of old town roofs rising high above, and the tops of the superyachts visible across the wall. On top of the wall there’s a walkway, where you’ll see a huge white sculpture of a man looking out to sea.

There are quite a lot of rocks in the shallows once you get into the water. Most of them aren’t particularly sharp but it can be a bit uncomfortable so some people buy rubber soled shoes, which really isn’t a bad idea for the many rocky beaches of the French Riviera.

The water is protected by rock walls arching around the beach with just a small opening, meaning that this is an extremely protected beach for kids to swim. The downside of this though is that the water quality in high summer can get quite grubby as it doesn’t circulate well and gets trapped. If you’re looking for really clear waters in high summer, head to the coves of Cap d’Antibes or over to Juan-les-Pins, where the water seems to be fresher. Even better, get on the ferry over to the Cannes Islands (Isles de Lerin), for gorgeous crystal clear water and a quiet day among the pines.

Although the water quality here is checked regularly by the Ministry of Health this beach is unsupervised so children should be watched at all times.

The sand at this beach really is lovely - soft, white and deep - with a really wide stretch of it sloping gently down to the water.

Unusually for the Riviera, there are no watersports rentals at all at this small protected beach. Nearby Salis beach has one watersports centre for towed watersports and kayak/paddleboard rental, but those wanting a wide range of watersports should head over to the nearby beach resort of Juan les Pins.

While very central, this beach isn’t that easy to find and in f, ct you probably won’t stumble on it unless you look down on it when walking around the ramparts.

Head to the right hand side of the port, and walk along the port in the direction of Millionaire’s Quay where the huge superyachts gather. Before you get to these big yachts you’ll see big iron gates in the wall on your right, leading through to the beach.

There’s lots of parking around here. You might be lucky enough to get free parking at the few spots lining the port opposite the beach, or you have paid parking in Port Vauban, either above ground in the port itself or in the new huge underground carpark under the open square outside the ramparts.